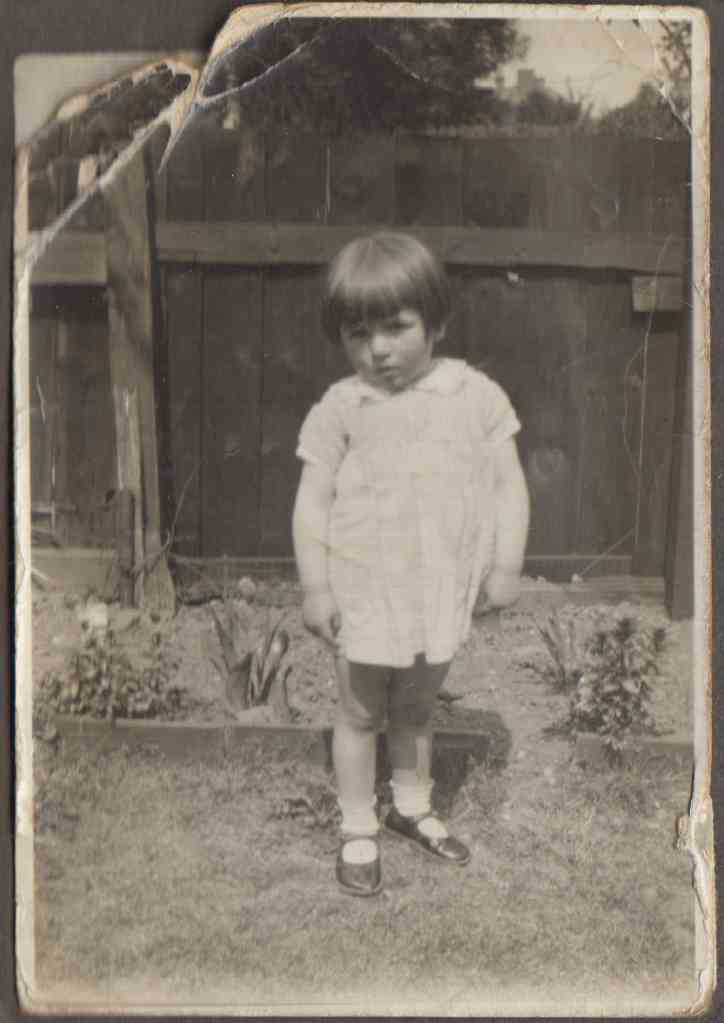 Born in 1935, June Chandler grew up outside London in the borough of Enfield. During the Second World War, her neighborhood sustained heavy German bombing, and Chandler had to evacuate to the north. After the war she married Laverne "Jeff" Chandler, an American serviceman stationed in England, and they moved to his family's tobacco farm in South Carolina. After the birth of their first child, Chandler's husband got a job with Lockheed Martin, and they relocated to Marietta, Georgia. Although he was laid off from Lockheed more than once, Jeff Chandler secured a position in the Air National Guard based at Dobbins Air Base, enabling the family to remain in Marietta. Choosing to remain a British citizen, June Chandler shared her cultural heritage with her friends and neighbors and passed along her favorite traditions to her children.

Growing up in Enfield

"It was what we call row houses. It was almost like what they have as town houses now, but they were built in the late 18th century. So we had neighbors stuck with us, and we had upstairs and downstairs. (Makes side-by-side motion with hands).…
2

The Start of the War

"When they started the war, we had rails in our yard, separating us from the front door, you know at the front, from the neighbors, and we had really pretty iron rails in front of our house going all around the park. Everybody did. And they took…
3

We had black-out curtains. And my dad was what they called an air raid warden. He, and another neighbor, they would walk the streets at night to make sure no lights were showing through the windows, and they would take it turns with different…
4

I had a green ration book because of my age. My brother had the blue, and my mom and dad had white ones. And I was able to get orange juice on mine, and we could get an egg once a week, and meat was almost inaccessible. My dad would buy some black…
5

Evacuation to the Country

"I was probably around five. Five or six. And I remember my mom and dad putting my brother and I on the train, and I remember us having our gas masks, but I don't remember having any luggage. I'm sure we did. And they put us on the…
6

"The biggest memory I have-- we had an American-- it wasn't a base. It was a huge tent in the green area near my house, and there was a bunch of Americans lived there. We used to go up there and say, “Got any gum, chum?” Because we…
7

Celebrating the End of the War

"The first thing I remember about that is the first Guy Fawkes Night, which is the 5th of November. We were able to have a big bonfire. And that was the first time we had really seen anything, and then they started getting the lamp lights and…
8

"I went to London a lot. I loved London. When I got older, we were able to catch a bus, or train, and go into London-- go to some of the newer movies. And then we'd have to take the last bus home, or else you'd be walking. Because they…
9

"I was in London, and my girlfriend and I were going to a movie-- and my husband was there. I did not like him. When the lights change in London, traffic goes. And they don't care who's in the road. And I had run with the girl I was…
10

A Sojourn in New York

"I just fell in love, and I couldn't have asked for a better person than the one I married. And so, you know, at that age, there again, I was 18. I had a lot of friends when we first got to New York. We went to the New York Port of Entry.…
11

"He was from a tobacco farm, so I thought that would be like a regular English farm which is very green, and very pretty, with horses and the whole bit, and I saw my first mule at his house. I'd never seen a mule in my life. It was just so…
12

"We lived there for a year and then moved up here. My husband got a job with Lockheed. He was a flight line mechanic. [Marietta was beautiful.] It was quiet. No traffic hardly. The Big Chicken was there, and it was a Chick, Chuck, and Shake back…
13

"But I went back three or four times. Like I said, I've been here for 23 years before I got to go home the first time. And my neighbors had a party for me. And we had some good eating and everything, because they knew that was my first time…