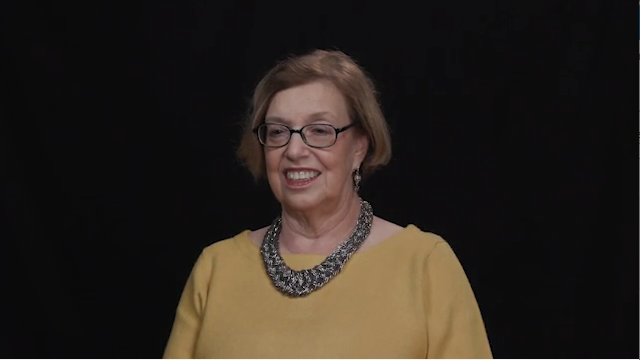 Born in Brooklyn, New York, in 1948, Susan Heinemann Berman is the daughter of German-Jewish Holocaust survivors. Her mother, Ruth Simon Heinemann, escaped Germany via Kindertransport to England along with her sister Hildegard Simon Gernsheimer in 1938, shortly after the Kristallnacht pogrom devastated Germany's Jewish community. The rest of the Simon family, Carl, Selma, Edith, and Ilse, became passengers on the ill-fated M.S. St. Louis, bound for Cuba. When the ship was turned away in Havana, they were granted asylum in the Netherlands. Although Edith was able to immigrate to the United States, by way of England, Carl, Selma, and Ilse ultimately perished at Sobibor.

Susan Berman's father, Manfred Heinemann, was imprisoned in Dachau with his father after Kristallnacht. Due to the persistence of Berman's paternal grandmother, Sabine Freiman Heinemann, in securing the family's immigration documents, they were able to come to the United States shortly after Manfred's father, Solly, was released from Dachau. The family settled in Brooklyn, New York, where Manfred, by then a U.S. Army veteran of World War II, met Ruth Simon shortly after the war was over.

Susan Berman lived an all-American childhood first in New York, and then in Framingham, Massachusetts. It was not until she was a young adult that she learned of her family's connections to the Holocaust. All told, she lost 37 relatives in the Holocaust, but her family's deep ties to the United States from before the war enabled her mother and two of her aunts to immigrate, and to survive. After years of living in communities all over the United States, from Wisconsin to Connecticut, Susan Berman and her husband, Steve, settled in Georgia in 1978. Susan completed her education, earning a college degree from Kennesaw State University in 2004. Fifteen years later, she shared her family's story with the Museum of History and Holocaust Education through a Legacy Series Oral History Interview.

Editor's Note: This tour will begin by following the story of Susan's grandparents, parents, aunts, and uncles growing up in Germany and then fleeing the violence of the Third Reich before shifting to Susan's story. As the child of survivors, Susan has become a memory keeper for her family. Through the Legacy Series, she is sharing her family's invaluable story with future generations.

"Well [my father, Manfred Heinemann] was born in 1922, and he lived in a town called Treuchtlingen, which was in Bavaria. And they lived a very comfortable life. My grandfather sold baking supplies. And eventually [my father's] brother was born in…
2

"My father was about eleven when Hitler came to power, and he had been enrolled in a school in Treuchtlingen, and was studying. And when he was 13 he became a Bar Mitzvah, and then the German government shut down the school that he was attending, the…
3

"So my father rode back to his house. And when he got there, my grandmother told him that my grandfather had already come home once, and she told him to go back out because they Gestapo had been by looking for him, and they wanted to arrest him. So…
4

A Case for Release

"They had applied for immigration, and they had quite a low quota number, but it seemed like people that had higher quota numbers were being called to immigrate, and they weren’t. And eventually my grandmother [father's mother] figured out that…
5

Starting Over in Brooklyn

"And they came to America in July of 1939. And my father wanted to go back to Europe to fight the Nazis. He wasn’t a citizen yet, so he had to apply for citizenry, and he got the necessary paperwork done, and he enrolled in the Army. And I have a…
6

"My [maternal] grandfather's family was in the cattle business... and he supplied the principality with the horses they needed for the town [of Cloppenburg]. He was very-admired and well-respected.There were about 15,000 people in the town. There…
7

A Long Journey to School

"There was a point in 1936 when the girls were not allowed to attend the parochial school anymore. My Aunt Edie, who was the oldest, was almost through with school there, so I think they made an exception. My mother, and Aunt Hiddie, and Ilse, had to…
8

"There was a knock at the door, and the Gestapo had said they wanted to see my grandfather. I believe he was still in bed. Well, they followed my grandmother into their bedchambers, and he got dressed hastily. They said he had to come with them. And…
9

"[Ruth] got home [from her trip to Oldenburg], and the first thing she noticed-- there were swastikas all over her house. And it had been a beautiful home, and it was prominently centered in the middle of town, and then she noticed that all the…
10

"And then they went on with 1000 children on that transport. They had a very harrowing experience. And they got to the border of Holland and Germany. And the soldiers there-- the German soldiers-- they boarded the train. And they harassed the…
11

"[Ruth and Hilde] eventually got to the hook of Holland, in Rotterdam, and they boarded a ship that took them across the English Channel and on to Dovercourt, England, and that was a summer camp with cabins, but they weren’t heated. And the crossing…
12

"Well, they were assigned to a cabin, and like I said, there were 1000 children on this transport. There were already children that were there from other countries. And what they were told to do was to make themselves as much at home as they…
13

"Eventually a group of compassionate Jewish citizens from the town of Harrogate, which is in the northeast corner of England came, and they were willing to take 25-30 young Jewish girls-- religious girls-- back to their community with them. And so,…
14

"They heard about this ship that was going to be sailing from Hamburg to Cuba. It was leaving in May of 1939. And they did everything they could to book passage on it. Apparently the tickets were sold out almost immediately. They had to pay an…
15

"Well, [my Aunt Edie] said there were a lot of young people, and she said that they had parties every night. This was a luxury liner. And it was taken over by the Nazis, so they flew the Nazi flag. They had a big picture of Hitler in the dining room,…
16

"They got there on the 29th, I believe, of May. And everybody was very excited. They packed their suitcases. They had brought them on the deck, and they were awaiting permission to leave to go to the land. And just 24, or maybe 48, hours prior to…
17

The Lights of Miami

"So slowly, but surely, they pulled up their anchor. They were headed for Florida, because they were hoping the United States would be more compassionate. When they got to the coast of Florida, or close to it, they could see the lights of Miami, and…
18

"Finally, four countries relented-- that was France, the Netherlands, Great Britain, and Belgium. Right. And there were 28 people that were allowed to disembark in Havana, because they had the documents. Twenty-two of them were Jewish, but the rest…
19

"[After arriving in Holland] My Aunt Edie, fortunately, was in touch with friends of theirs who had immigrated to England prior to them becoming passengers on the St. Louis. They had offered her the opportunity to become their house daughter and…
20

"[My grandparents] did correspond with [my mother and Aunt Hiddie] quite a bit, and the last letter – I have a copy of it-- it told the girls in England that they had a lot of faith in God, that the girls-- Hilde and Ruth-- shouldn’t worry about…
21

"Well, as it turns out, the Nazis were eradicating Jews at that point in all their occupied countries, as well as in Germany. And in 1943--I believe it was May 18-- they [Selma, Karl, and Ilse Simon] were arrested, and they were sent to Westerbork,…
22

"I believe they [Carl, Selma, and Ilse Simon] only were there [at Westerbork] a night or two before they were sent to Poland, to Sobibor concentration camp. And on the 21st of May, they were asphyxiated. And my mother and her sisters did not find out…
23

"Well, when they [Ruth and Hildegard] graduated from school, they were assigned to becoming apprentices in various businesses, and Harrogate was a very popular location for tourists. They had spas and very fancy salons there. So my aunt became very…
24

Arrival in the United States

"Then [Ruth and Hildegard] went through Vermont, and they got all the stamps-- they had all of the immigration papers. Then they eventually went to New York where my Aunt Edie was living temporarily, because she had met my Uncle Ruby who was a…
25

Sojourn in the Midwest

"And then they went off to Illinois to see Uncle Julius as well. And they lived there for a while. They were living in this small town in Illinois. And they were just so excited to be with family again. Uncle Julius was a wonderful man, and his wife…
26

"My aunt got married in ‘45-- to my uncle, and they went to a synagogue that was a German refugee synagogue, and there was a man that kept staring at them during the service-- and this was my Aunt Hiddie and my mother-- and eventually he approached…
27

"We moved to Queens for a while, and then in 1954 my brother was born."My Aunt Edie and her three daughters lived in Brooklyn with my uncle. They lived in the bottom part of a two-storey house, and on the top were my uncle’s parents, Mr. and Mrs.…
28

"Well, eventually my father took a job as a salesman in a company that was based out of Pittsburgh, so we moved briefly to Pennsylvania while he was in training, and then he was assigned to the New England territory. So we moved to…
29

"Then I went to college at Bryant College in Providence, Rhode Island, and I was studying to be a secretary. And the second year that I was there, I was introduced to my husband, Steve Berman, and after dating for some time we became pinned, and…
30

"But how did we get to Georgia? From Wisconsin we went to Buffalo. From Buffalo, we were transferred to Connecticut. And then in 1978, Steve said, 'How would we like to move to Atlanta?' And by that time I’d had enough of the cold, and I’d heard…