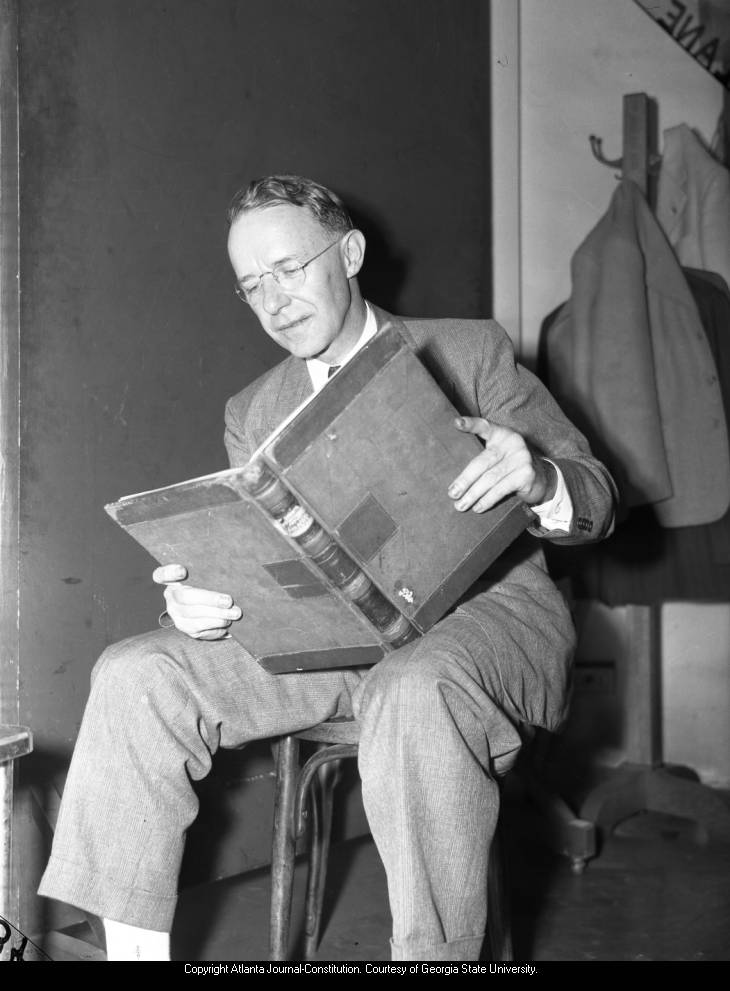 Born on March 1st, 1890, in Atlanta, Georgia, William Hartsfield dedicated his life to the betterment of his hometown and community. During his six terms as mayor of Atlanta, Hartsfield helped guide the city through tremendous change and growth. Due to the efforts and policies of Hartsfield, Atlanta grew from a city of 100,000 to one million people, transforming the city into a major economic and cultural center. Mayor during a time of violent opposition to integration, Hartsfield envisioned Atlanta as a “city too busy to hate." In many ways, Hartsfield helped turn this vision into a reality for his home city.

Growing up in Atlanta, Hartsfield attended the city’s public schools but failed to earn his high school diploma. At the age of 25, he began work as a law clerk for the firm Rosser, Slaton, Phillps, and Hopkins. He spent his nights studying legal journals and books in the hope of passing the Georgia bar. In 1917, he achieved his goal and he was admitted to the bar. Hartsfield left the law firm where he started his legal career and opened his own office in 1921. A year later, Hartsfield successfully ran for a position on the Atlanta City Council. Hartsfield firmly believed in Atlanta’s potential for air transportation and as an alderman, urged the city council to establish the Atlanta’s first airport in 1925. Hartsfield’s work to develop and grow Atlanta’s airport earned him the title “father of aviation.”

In 1936, Hartsfield successfully campaigned for his first term as mayor of Atlanta. He took office as the city struggled to recover from the Great Depression and his first priority was to ensure Atlanta did not sink into bankruptcy. Hartsfield recruited the help of major business leaders in Atlanta, such as Coca-Cola CEO Robert Woodruff, and convinced the Georgia General Assembly to pass budget reforms. Despite the accomplishments of his first term in office, Hartsfield was not reelected for a second term in 1940, defeated by Roy LeCraw. He would soon return to the position of mayor, however, when LeCraw resigned from office following the attack on Pearl Harbor. A major in the Georgia National Guard, LeCraw reported for active duty, and in May 1942, Hartsfield won a special election for mayor. His second term in office was dedicated to guiding a city through war. He would serve as mayor for four more terms until his retirement in 1961.

During his 25 years as mayor of Atlanta, Hartsfield invested in the city’s infrastructure and fulfilled Atlanta’s potential to become a modern city. Under his leadership, Atlanta built parks, expanded its airport, constructed an extensive expressway system, and developed into a major tourist center. One of Hartsfield’s most important accomplishments as mayor was ensuring the peaceful integration of Atlanta’s public schools. Hartsfield was determined Atlanta would become a model for peaceful race relations in the southeast and in the entire United States.

On June 7, 1961, Hartsfield announced he would not seek reelection and would retire from politics the following year. In retirement, Hartsfield served as a consultant to companies such as Coca-Cola and Georgia Power. His successor, Ivan Allen, continued Hartsfield’s work, peacefully guiding Atlanta through the Civil Rights Movement. During a trip to New York City in February 1971, Hartsfield passed away from a heart attack a week before his 81st birthday. Hartsfield left behind a powerful legacy of progress, one that fundamentally shaped the Atlanta we know today. Shortly after his death, the Atlanta City Council renamed the Atlanta airport to honor Hartsfield’s many contributions to the city he loved.

“Memphis is preparing to spend several million dollars in development of Mud Island for aviation purposes and the plan is to make it one of the most modern and finest fields in the entire country. Birmingham, Savannah, Augusta, New Orleans,…
2

“You and I may as well face the fact that our people now demand of us a right-about-face in the conduct of this government, and will stand for no petty strife or selfish political manipulation. I take office with a feeling of humble gratefulness to…
3

His One and Only Defeat

“I thought I did such a helluva good job that I didn’t need to campaign, but that’s not right. You’ve got to fight every time. You could pave the streets with gold, reduce taxes to a nickel a year and scent the sewers with Chanel No. 5 – and they…
4

“Steering a city through troublesome times is just like piloting a ship through stormy waters. You don’t know what you are going to run into but you are going to be ready for anything. You may have to go through obstacles instead of around them. Or…
5

The Great and Friendly City of Atlanta

“Here in our own city government we are proud of the progress that is being made in amicable race relations. We have and are making progress in increased public housing for our Negro citizens. We have built new parks and libraries; we have aided in…
6

A Plan of Improvement

“The Plan of Improvement has unshackled our town, given it new life and hope. A new spirit of optimism is in the air. True, there are still those who for selfish reasons will try to impede our progress and place obstacles in our path, but we are…
7

“Atlanta - Since, I, along with others, have spoken out against the county unit system, it is but natural for its defenders to fire back. As usual they rely on prejudice and hate because they have no logic on their side... Why must Georgia always…
8

“Atlanta has prided itself in being a beacon of tolerance and racial and religious decency in the South. This shocks and amazes us. We cannot help but feel this is the work of an out-of-town gang operating southwide. The full resources of the police…
9

“I don’t give a damn what [Governor] Griffin or anyone else said. I refuse to see Georgia go through another period of ignorance. People have asked me why I got in this school fight and I’m not ashamed to tell you. I am the son of a father and mother…
10

Before the Balance of the Nation

“But the most important thing about our city, with its natural ad­vantages, as the great southern regional capital and center of south­ eastern trade and commerce, is its good name and its image before the balance of the nation. In this electronic…
11

We Will Miss Him

“Hartsfield was a colorful con man, in his way, a great promoter, a man who could breathe life into any cause he believed in. He could make you angry, because he was stubborn and sure of his own convictions. Yet he brought a strength and vitality and…

*The words bolded throughout Hartsfield's tour are those defined in the glossary for the accompanying Georgia Journeys Teacher's Guide.