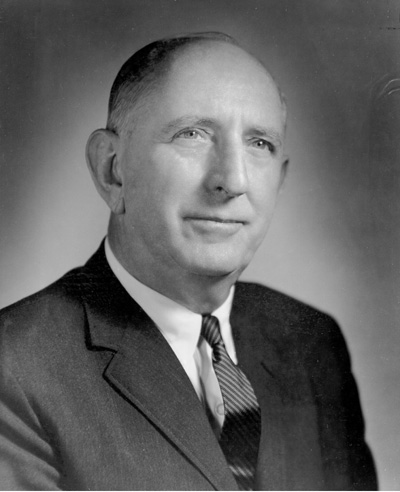 Richard B. Russell Jr. was an American politician who served as governor of Georgia and a U.S. senator during the middle decades of the 20th century. Born on November 2, 1897, in Winder Georgia, Russell was guided into a political career by his father, Chief Justice of the Georgia Supreme Court, Richard B. Russell Sr., After graduating from the Gordon Military Institute in Barnesville, Georgia, in 1915, Russell received his law degree from the University of Georgia in 1918.

Russell became the youngest member of the Georgia House of Representatives in 1920. A supporter of President Roosevelt's New Deal during the Great Depression, Russell served as Georgia's governor from 1931 -1933. He then went on to a career in the U.S. Senate that lasted almost forty years. His signature legislative achievement was the creation of the National School Lunch Program in 1946. He also brought federal research facilities to Georgia, including the Centers for Disease Control and Prevention.

Russell was an effective and well-liked senator, but his legacy has been marred by his support of segregation as part of the Senate's Southern Democrats. From opposition to anti-lynching legislation in the 1930s to filibustering of the Civil Rights Act of 1964, Russell remained committed to white supremacy even as he advocated on behalf of Southern farmers. This stance likely hindered his chances to become a candidate for U.S. president in 1948 and 1952.

A lifelong bachelor, Russell was dedicated to his political career. He passed away in Washington, D.C., in 1971.

Big Roots in a Small Town

Editor’s Note: In his biography of Russell, Gilbert. Fite, quoted above, stated that the Russell family had existed in North America since before the American Revolution. Russell’s father graduated from the University of Georgia and became the judge…
2

A New Governor and a New Deal

Editor’s Note: After his time in Georgia’s House of Representatives, that began when he was twenty-three, Richard ran for Governor. He would win the election and be sworn into office by his father in June of 1931. During his time in office he became…
3

From State to Nation

Editor’s Note: Russell would leave his post as Governor not long after obtaining it, as Georgia Senator William Harris would die of a heart attack in 1932. After a heated senate run in 1933 making him the youngest member of the senate, Russell began…
4

Success as a Senator

Editor’s Note: The above quote is from the Congressional Record concerning the Richard B. Russell National School Lunch Act. A great deal of Russell’s efforts as a Georgia Senator revolved around agriculture both at home and abroad. He would be…
5

Editor’s Note: Russell had left behind a legislative career that lasted for over half a century. He would be remembered as an agrarian and an early proponent of the New Deal. He would also head numerous committees including one to investigate the…