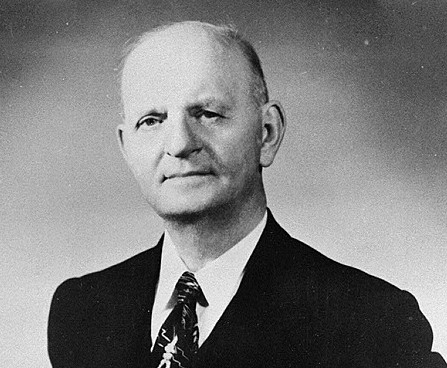 Carl Vinson committed his long career in the U.S. House of Representatives to the defense and security of our nation. A Georgia native, he served as a congressman for 25 consecutive terms, the longest tenure in U.S. history, and helped pass significant legislation to bolster the U.S. Navy and Air Force. He was the youngest member of Congress when he was sworn in on November 3rd, 1914, only days before his 32nd birthday. By the time he retired in 1964, he had become one of the most powerful members of the House and one of the most influential voices for U.S. military preparedness. As chairman of the House Naval Affairs Committee and the House Armed Services Committee, Vinson contributed significantly to the growth of U.S. sea and air power and left behind a lasting imprint of public service.

On November 18th, 1883, Carl Vinson was born in Georgia’s former state capitol, Milledgeville. One of seven children, he grew up on a farm and from an early age showed promise as a public speaker and politician. Shortly after graduating Mercer Law School in 1902, he served two terms in the Georgia General Assembly before running for Congress several years later. His congressional career spanned both world wars and multiple Cold War conflicts. He firmly believed peace could only be secured and maintained if the United States was prepared to defend against any possible risk to that peace. To that end, Vinson advocated for legislation to bolster the U.S. Armed Services.

When Congress was in session, Vinson and his wife, Mary Green, lived in Chevy Chase, Maryland. Vinson always came home at 4:30 in order to share with Mary the day's work and news. When Congress was in recess, Vinson and his wife returned to their farm house in Milledgeville. Sadly, Mary died prematurely in 1949 after a long battle with a terminal illness that crippled her during the last years of her life. Although Carl and Mary never had biological children, they had a close relationship with his many nieces and nephews as well as one of his political aides, Charles Tillman Snead Jr., whom they considered to be like a son.

After serving in Congress for 50 years, Vinson announced his retirement in 1964. He left D.C. quietly, on Christmas Day by way of train, weeks before his announced departure. He spent his retirement in his hometown of Milledgeville but remained busy, frequently acting as an adviser to presidents and government officials who came to him with national security issues. In retirement, Vinson received numerous awards and honors for his time in office including the Presidential Medal of Honor. Vinson passed away in Milledgeville on June 1st, 1981 at the age of 97. Shortly after his death, the University of Georgia renamed its Institute of Government after him in order to honor his lifelong commitment of service to his country.

A Mission for Military Preparedness

“I am a hater of war and a devoted lover of peace, but, sir, Mr. Chairman, in my hour of seclusion and study I have to the best of my humble capacity held up the lamp of the past to the face of the future, and I call God to witness that I would be…
2

“I wanted to serve on a committee where I could see the results of my labors. When you authorize the construction of a military base or a big carrier you can see the results.”Editor's Note: Carl Vinson spent much of his first term in Congress…
3

“I favor a navy for this country second to none in power. I do not advocate a navy to rule the waves, but I do believe our country has a tremendous responsibility in helping to preserve the freedom of the seas for peaceful commerce.” Editor's Note:…
5

“I do not know where this country would have been after December 7, 1941, if it had not had the ships and the know how to build more ships fast, for which one Vinson bill after another was responsible.” Editor's Note: On December 7th, 1941, Japan…
6

“It may be a long and hard struggle, but we will do it [win the war]. When it has been done, our next job will be to ensure that the threat of aggression is removed from the world we live in. In order to do so we must be strong – strong enough to…
7

“I figured it all out, and took them along for two reasons: First, I figured that with all those big Air Force people aboard, the pilot would be very careful when we got up in the sky. And second, I wanted to make sure that if the plane did come down…
8

“Gunfire never destroyed an idea and by the same token, the searing heat of an atomic bomb will not obliterate the philosophy of communism. Only a better philosophy of life, that which comes from the minds and hearts of free men, can ever permanently…
9

“It is continuing strength that will maintain peace for this nation. But strength alone without the will to use it loses much of its vitality. The world waited with bated breath our decision last fall when it became apparent that Cuba was about to be…
10

“Had he lived, the nation would have the continued benefit of his wisdom, his foresight, his humanity, his understanding, his vigor and stamina, his incomparable leadership. All has now been ended for this great and good man. He now belongs to the…
11

The Closing of a Chapter

“For half a century, this great and good man graced the Congress of the United States. Through our birth pangs as a global power, through two terrible World Wars, through isolationism and a cold war, through the momentous first years of the atomic…

*The words bolded throughout Vinson's tour are those defined in the glossary for the accompanying Georgia Journeys Teacher's Guide.