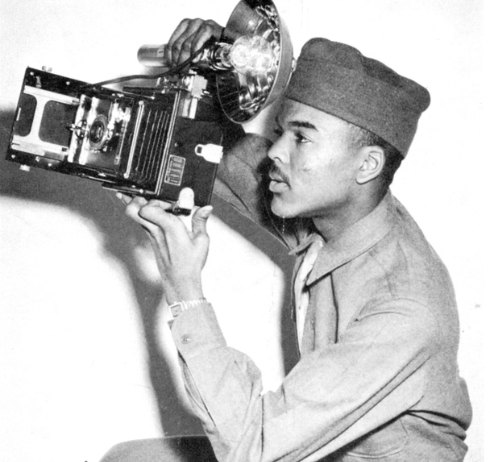 William A. Scott III moved with his family to Atlanta in 1928 at the age of five. His father founded the Atlanta Daily World, one of the most influential African American newspapers in the nation. W. A., as he was known, studied business administration and mathematics at Morehouse College. Drafted into the U.S. Army, W. A. served as a reconnaissance sergeant, photographer, and part-time historian in the intelligence section of the 183rd Engineer Combat Battalion. In April 1945, he was one of the first Allied soldiers to enter and photograph survivors of Buchenwald concentration camp. In 1991, a year before his death, W.A. was honored for his valiant service in World War II and was appointed to the United States Holocaust Memorial Council by President George H. W. Bush.

"My slave ancestors, despite the horrors they were subjected to, had value and were listed among the assets of a slaveholder. Had the Nazi position prevailed in the aftermath of the U.S. Civil War (my slave great-grandfather and namesake, William…
2

"But now as far as the attitude, I went into the Army at age 20. And I -- I guess I have been familiar with the number of forms of discrimination that blacks were subjected to. I've lived all of my life in the south. I was born in Johnson City,…
3

Drafted Out of College

Editor's Note: After graduating from the Atlanta Laboratory High School, W.A. Scott went on to study business administration and mathematics at Morehouse College. He was drafted into the U.S. Army in 1943 and inducted into a segregated squadron at…
4

"I started out really as a photographer at an air base squadron at Tuskegee, Alabama. And incidentally at Tuskegee it was the training for black pilots. About 1,000 were actually given wings at this institution. It really was not at Tuskegee…
5

"And the Army started what they call specialized training program, ASTP, in '43, and it came through and tested individuals. And I said, 'You know, maybe I'll try it.' Because they were offering a little commission if you…
6

"I ended up getting some more training in camera FLIR at engineering school in Balfour Virginia (sic -- this could be Balls Ford, Virginia), and went overseas with this unit after. The fellows really were ready to eat nails. They had 14 weeks of…
9

Editor's Note: W.A. Scott was studying at Morehouse College and waiting to marry his childhood sweetheart, Marian Willis, a student at Spelman College in Atlanta, when he was drafted into the U.S. Armed Forces in 1943. He was able to visit her at…
10

"Actually, when I first got to Europe, I got there by way of Liverpool on a ship that carried 14,000 troops. This was the USS America, and I think it was called the West Point at that time. It was our largest ocean liner. And we took five days to…
11

"And getting off the boat at Liverpool at night – I can remember being greeted by some of my fellow American soldiers on shore, and they were saying, 'Oh, Black Joe,' as we were coming down the gangplank."Editor's Note:British citizens largely…
12

"And then we got on a train and went on to a little place called Fordingbridge, which was sort of southwest of London and just below Salisbury. And from there we had an opportunity to get our equipment together and take a couple of weekend…
13

"And we went over across the channel. And we got off at Le Havre. We went up through Le Havre. The forces had moved on in, and we were able to go up to get off at Rouen, as I remember it."
14

"We got out, and we actually camped in the woods near Rouen about 38 or 40 kilometers outside somewhere, and my unit was self-contained motorized. We had – all of our companies had their own transportation, but we were immediately incorporated…
15

"During the night, we got an MP motorcycle that came in and gave us new orders. And instead we headed north to Metz. This was in north France, heading towards the Battle of the Bulge, which brought [us close to] the Third Army headquarters. We talked…
16

The Battle of the Bulge

"And we move out a couple of days, and right up to within a few kilometers of Bastogne, which had been surrounded, and we were about 1:30 at night, and we could see all of this trace of fire and everybody running all around us. And we were wondering…
17

"I know in northern Luxembourg, just before going into Germany, we had gotten some Christmas packages after the bulls were stopped and turned around. And we got a chess set, and I learned how to play chess." Editor's Note:Witnessing the inmates in…
18

"When one explores the hall of memories, some moments cannot be forgotten or dimmed by the passage of time. I remember the day — clear and sunny — riding in a convoy into Eisenach, Germany, on April 11, 1945, as World War II was ending; and a…
19

"As we rode into Buchenwald, I can remember thinking: 'There is no place as horrible as we have been told — no atrocities — we should turn around, stop wasting time, go back to Eisenach and establish our Battalion Headquarters.' But we continued and…
20

Seeing and Not Seeing

"[A friend of mine] could recall that the American track team, which blitzed with Jesse Owens for the '36 Olympics, had two Jewish dash men that they would not allow to participate because the Germans didn't want them and they…
21

"We were taken back up or given orders to go to the Dusseldorf area in an apparent occupational capacity. But after two weeks there our battalion commander said we were moving out. And we find ourself in a convoy to Merced. And the war was still…
22

"We just bust this outfit up, and I ended up with a unit -- a different unit called a 1333rd Engineer Regimen going to the Panama Canal on the way to the Pacific. About half the men in my unit ended up coming back to the states. Well, I got on a…
23

Waiting for the End of the War

"After the second atomic bomb was dropped, we were almost sure we were going back to the United States, and we didn't. And we ended up anchored at Enewetak group on Yap Island group on a little island called Maug Maug, which was a…
24

Editor's Note: Scott's obituary in the Atlanta Daily World describes his postwar career as follows:"After the war, he returned to Atlanta and completed his education at Morehouse. He began his married life with Marian, and in 1948 became circulation…
25

Integrating the West Side

Editor's Note: In his 2005 book, White Flight: Atlanta and the Making of Modern Conservatism, Kevin Kruse relates an important episode in Atlanta history in which W.A. Scott played a significant role. In 1948, W.A. Scott III built his family home at…
26

Editor's Note: W.A. Scott's obituary in the Atlanta Daily World describes his chess legacy as follows:"Well known in the area for his expertise in chess and rated an expert by the United Chess Federation, Scott was president of the Atlanta Chess…
27

Editor's Note: During the final twenty years of his life, Scott began to write, speak, and record testimony about his experience as a witness to the Holocaust. His first experience came in 1979 when he met Alex Gross, a survivor of Buchenwald, at an…

You can view the oral history he recorded with the United States Holocaust Memorial Museum here.